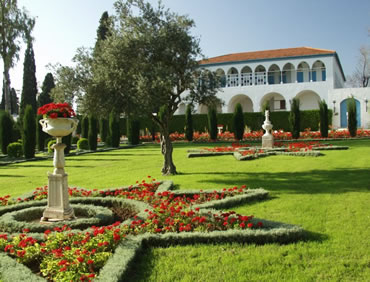 Bahá’u’lláh characterized the Mansion of Bahjí as the "lofty mansion," the spot which "God hath ordained as the most sublime vision of mankind."(24)

While living there, Bahá’u’lláh wrote the last great work of his Ministry, the Epistle to the Son of the Wolf.

“In the name of God, the One, the Incomparable, the All-Powerful, the All-Knowing, the All-Wise.

Praise be to God, the Eternal that perisheth not, the Everlasting that declineth not, the Self-Subsisting that altereth not. He it is Who is transcendent in His sovereignty, Who is manifest through His signs, and is hidden through His mysteries. He it is at Whose bidding the standard of the Most Exalted Word hath been lifted up in the world of creation, and the banner of "He doeth whatsoever He willeth" raised amidst all peoples.”(25)

Photo 3 of 10: A view of the mansion today from the south. The Bahá'í community has spent many decades beautifying the buildings and grounds where Bahá’u’lláh spent the final years of His life.

A view of the mansion today from the south. The Bahá'í community has spent many decades beautifying the buildings and grounds where Bahá’u’lláh spent the final years of His life. (Bahá'í World Centre archives)